We recently headed to East 9th's Stella's Music Club for an influencer event with CLESeats. 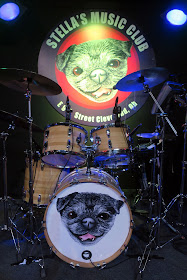 This bar was 'built by musicians, for musicians" and the ambience, events, and even some of the names of menu items all reflect that passion and purpose. 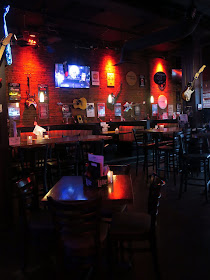 They have a full bar, and one bartender in particular that made several of us different "surprise" craft cocktails that did not disappoint. 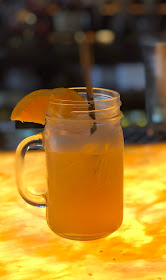 There are several great small plate Snacks to start with, and we dove right in to the Corn Dogs ($10) that are cornmeal battered bites with a tomato aioli and stadium mustard. It was a generous portion, and a perfect ratio of batter to dog. 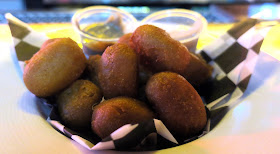 Mr. H was feeling like a burger so he ordered The Jam Burger ($14) with Great Lakes yellow cheddar, double-cut bacon, and your choice of a brioche or pretzel bun. Served with a side of fries. I went for the Grilled Chicken Tacos ($13) with queso fresco, valentina aioli, sweet peppers, onions, and cilantro. They could have used a bit more seasoning or something to really impress, but they were a solid choice and apparently a menu favorite. 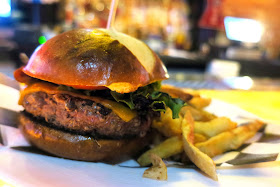 The team at Stella's were very generous and brought out several Snacks for the group to try, and then three Pizzas as well. I didn't snag a sample of the pizza, but the Chicken Wings and Bavarian Pretzels were both good versions and easy to share. The mountain of Stella's Nachos also looked pretty darn good with a tower of toppings, including pulled pork, but I didn't sample them. 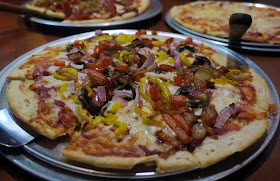 Then the real fun of the night kicked in. A round of Jello shot syringes appeared... 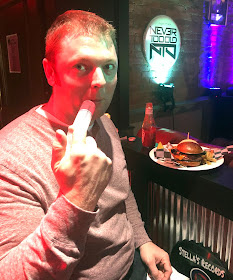 ...and Live Band Karaoke started. It was my first time experiencing karaoke with a live band, and man what a difference! Our night's fearless leader, Lauren, slayed it up on the stage. 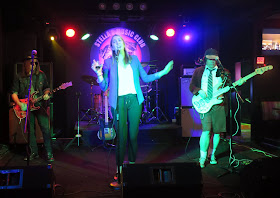 Opened in 2018, I had not yet discovered Stella's Music Club (across the street from Progressive Field). But this live music venue has a lot to offer with a full bar, menu with food coming from Brickstone next door, events, and more. Maybe not my usual "scene" but a great stop on a future Indians game night. Hopefully, on Live Band Karaoke night again. Such fun!

Disclosure: I was invited to attend a tasting event with a guest where all food and one drink was complimentary. All opinions stated are 100% my own.
Share